There’s a thought experiment called the ship of Theseus. It asks that, if you replace every plank of a ship, can it still be called the same ship? Likewise, if you have a superhero with regeneration powers who’s had every part of his body shattered, exploded and/or ripped off, is he still the same superhero? Probably not, and that’s a good thing. 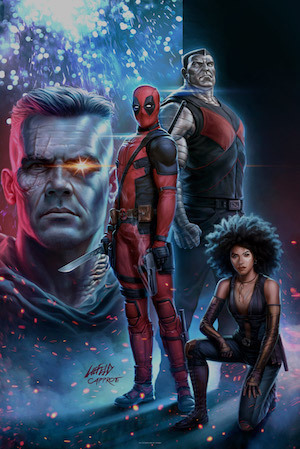 In the upcoming Deadpool 2, the merc with the mouth is squaring off against his longtime “it’s complicated” opponent Cable. This brings Deadpool back to his roots, as the character first appeared fighting Cable in the New Mutants #98 in 1991 — meaning Deadpool’s now roughly twice as old as his sense of humor. Likely to celebrate this full circle, Heritage Auctions is selling the first ever page of Deadpool squaring off against Cable by artist Rob Liefeld, showing us Deadpool in his original skin (and already losing part of it in the last panel). 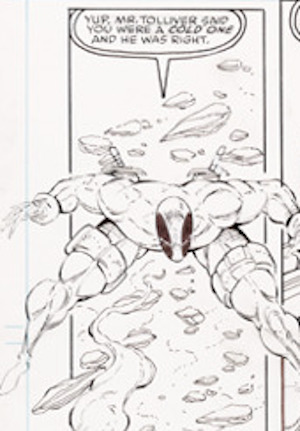 Fans of the movies might notice there’s a distinct lack of banter and crotch humping coming this fresh-faced (well, not that fresh) Deadpool. The attitude, fourth wall breaking and frequent references to giving backseat handjobs to Wolverine only came later. As we’ve talked about before, that’s because early Deadpool was a bit more cookie cutter, which is a more diplomatic way of saying that he was an uninspired rip-off of a DC supervillain. And yes, that makes Deadpool’s calling Cable out for his overserious DC-like ‘tude definitely a case of the pot calling the kettle grimdark. 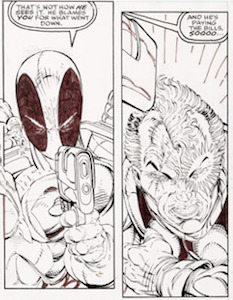 This is great news for fans and newcomers alike, as this sort of reboot of Deadpool vs. Cable gives a better, funnier and more relevant Deadpool a chance at punching up his own past — and Cable’s balls, we’re assuming. But if you want to own this bit of Deadpool pre-history before it gets rewritten, the auction is going until May 10th. Be warned though, the price of this single comic strip already up to $30,000. Quite a lot, though slightly below the price of a single Calvin and Hobbes strip in the same auction — something we know Deadpool himself would definitely approve of.

For more attempts at witticisms and his personal recipes for toilet wine, do follow Cedric on Twitter.

Support Cracked’s journalism with a visit to our Contribution Page. Please and thank you.

For more, check out The Queen Has Her Own Private (Creepy) Pet Cemetery and What Would The Netflix Movie Theaters Be Like?